Posted on June 26, 2019 by McLaughlinandYoung 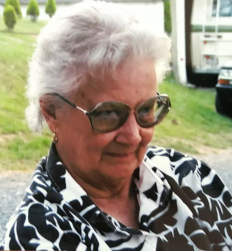 She was born September 15, 1930 in Goshen, Virginia, the daughter of the late Herbert Glenwood Nuckols and Maggie Lena Bryant Nuckols.

Ethel was formerly employed as a seamstress for many years with many companies.

She was formerly a member of the Craigsville Rescue Squad, as well as an avid biker who loved to ride her Harley and went by the nickname “Sapphire”.

She was preceded in death by her husbands, Anderson Robertson and William “Joe” Thompson; and her brothers and sisters, Janie Plogger, Fairbee Clifton, Daisy Nuckols, and Roy Nuckols.

The family will receive friends from 6 – 7 p.m., Saturday, June 29, 2019 at Craigsville Funeral Home, and at the home of Charlotte Phillips at all other times.

A graveside service will be conducted at 2:00 p.m., Sunday, June 30, 2019 at Goshen Baptist Cemetery with Claudette Wilcher assisting.

McLaughlin & Young Funeral Home, Millboro Funeral Home, and Craigsville Funeral Home are owned and operated by John and Debbie Young. They commit themselves to providing loving and compassionate service to everyone. It is their sincere desire that you feel comfortable about the decisions you make and leave their offices with a feeling of satisfaction, honesty, and commitment. Phones are answered after hours by the company's answering service. Staff and licensed directors are on call 24 hours a day, 7 days a week. You may make an appointment at anytime that is convenient for you.
View all posts by McLaughlinandYoung →
This entry was posted in Uncategorized. Bookmark the permalink.